The NLLA is pleased no further cuts were announced for the Newfoundland and Labrador Public Libraries’ operating budget and that the amount is back to its pre-2016 budget of $11.3 million.  We are especially thrilled that Minister Kirby confirmed that the closing of 54 Public Libraries is officially off the table and is instead optimistic that new libraries will open.

This is a big relief to library workers and supporters throughout the province and beyond. From the moment the budget came down in 2016, there was an outpouring of support for libraries and a real fight to make sure something so unfathomable would not happen.  The unmeasurable support and determination to prove the value of public libraries actually lead to a reprieve until a review could be completed.

Once the review was complete, an uncertainty for the Public Libraries has continued to linger, so the news that mass library closures is “shelved” is a fresh breath of air. The NLLA is so thankful to its members and the community at large for the magnificent advocacy work and the determination to save the Public Libraries.

Even with this good news, the NLLA is still concerned about the current level of funding.  According to the EY (Ernst & Young LLP) Review, NLPL is 42% below the national per capita average, and is not enough to sustain the province’s library system.  This review gave several recommendations on funding, and the NLLA remains confident that this, along with the other areas highlighted in the EY Review, are being investigated further by the Provincial Information and Library Resources Board (PILRB). The NLLA looks forward to  assisting with consultations, planning and researching the ‘Way Forward’ for the Newfoundland and Labrador Public Library system.

As many of you are aware, Kate Shore, President of the Newfoundland and Labrador Library Association, was asked by local media outlets to comment on the Organizational and Service Review of the Newfoundland and Labrador Public Library System the day after its release. These media appearances included a on-air interview with Anthony Germain on CBC St. John’s Morning Show and with Danielle Barron from NTV. A subsequent article, written by Stephanie Tobin at CBC, was produced with material from the live interview.

The NLLA executive wishes to apologize for any comments that may have been misconstrued or taken out of context from those media reports. Any comments related to Newfoundland and Labrador Public Library (NLPL) staffing were made in response to a direct question related to recommendations eight and nine. These comments were in no way meant to devalue the integral role library assistants and technicians play at the library, nor was there any suggestion to replace workers, but rather to add to the province’s library system.

The NLLA is committed to representing the interests of all library stakeholders and the communities it serves in the province. This mandate is one it holds dear. It is in this spirit that the executive wishes to move forward and build a better tomorrow for the Newfoundland and Labrador Public Library System together. By standing together, all of us are in a better position to make that happen.

The provincial government has released the much anticipated report by EY outlining a number of recommendations for improving the public library system in Newfoundland and Labrador. The NLLA is currently reviewing the document in order to prepare a formal response. You can view/download the full report. Our association welcomes any comments or feedback on the report. Please contact our 2017-2018 NLLA President, Kate Shore.

Join us on Sunday, May 7, from 6:30-8:30 pm at the Marjorie Mews Library for the 2017 Annual Pre-Conference Social with refreshments and snacks. Julia Mayo, Branch Supervisor, and Kristina Walters, Library Assistant, will also tell us what’s happening at the Marjorie Mews library. 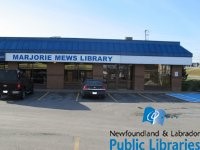 Libraries both big and small are integral parts of their communities. At Marjorie Mews Public Library we feel that we fill that role well because of the staff and the attitude we have. We believe that by having ownership of our “product” and having a positive attitude about our work, there is nothing we cannot achieve. It is our philosophy; if you are not having fun (at work) you are doing it wrong. We work hard to create positive partnerships within the community with businesses, schools and other community groups. Over the years we have steadily continued to push the limits of our space, our budget and our imaginations to bring in programs that appeal to our patrons and their families.

Kristina and Julia have been working with the Newfoundland and Labrador Public libraries for about nine years. They find great satisfaction in doing all kinds of library work, from answering reference questions, coordinating adult programs and basic computer classes to early literacy outreach and children’s story time.

To register and find out more about our upcoming annual conference, please visit our webpage or contact planning committee chair, Kate Shore.

NLLA Disappointed but Unsurprised by Public’s Reaction to Library Consultation

NLLA was initially pleased that the provincial government kept its promise to consult the public, and that our association was contacted directly by EY, the company hired to conduct the review. Members of NLLA will be meeting with the reviewers in locations across the province this month.

Although we strongly believe in the importance of public consultation and encouraged the public to participate in one of the roundtable sessions and the online survey, we had concerns about the process that the province outlined in its September 30 announcement. NLLA member, Crystal Rose, spoke with media on October 4th, questioning the validity of the consultation process and outlining some of the association’s chief concerns. We were dismayed that there was little advance notice for the public sessions. With less than a week’s notice before the first sessions, we question how the review can gather comprehensive data regarding the proposed library closures.

NLLA is also concerned that none of the libraries slated for possible closure is included on the list of locations for consultation. We strongly urge the reviewers to go directly to the communities that would be affected by the proposed closures, in addition to the ten scheduled public roundtable sessions.

Furthermore, we are gravely concerned by the lack of library representation on the steering committee to whom the consultants will deliver their review. There are no individuals outside of the Provincial Information and Library Resources Board, the body who originally suggested that the best way to deal with the budget deficit was to close 54 libraries, or outside of Provincial government on the steering committee. There are no members of the committee who currently work in public libraries, and no representatives from the province’s library association. There are few librarians and no library staff in the group. It is essential that the views and concerns of librarians and library workers be addressed in the review process.

NLLA was unsurprised by the negative public reaction to the recent roundtable consultation session held in St. John’s this past Thursday evening. Significantly underestimating the number of people who would attend and using a consulting firm to control the discussion with a rigid question and answer format has left the people of Newfoundland and Labrador with the impression that the provincial government is not fully committed to a truly consultative process.

We believe that a review of our province’s public library system is an important task and we strongly encourage the reviewers to widely consult all those who will be affected by the decisions and outcomes of this review.

After much media coverage and public outcry at the proposed closure of 54 branches of the Newfoundland and Labrador Public Libraries in April, the provincial government announced in June that they would suspend the library closures pending “an external assessment that contemplates the full impact a library has on its community.”

NLLA President, Krista Godfrey, spoke to media in July commending the decision, “We’ve had a lot of feedback from communities, they’ve been very upset, kind of blindsided by this decision, so I think this will give them a chance to actually have their voice heard, which is excellent,” but also cautioned that it’s vital to ensure the committee conducting the review looks at individual libraries to make informed decisions if they move ahead with closing any of the locations.  “One of the things I’m hoping will come out in this review is how underfunded this system is and will show that in order to provide the best system, we need to address the chronic underfunding that has happened,” said Godfrey.

Now, the public are invited to participate in the province’s review of the provincial public library system. Public roundtable consultations will run from October 5 to November 2, and will consist of ten public roundtable sessions, as well as an online surveys and written submissions. The roundtable sessions will take place in Bay Roberts, St. John’s, Marystown, Clarenville, Springdale, Grand Falls-Windsor, Twillingate, Rocky Harbour, Stephenville, and Labrador City:

In addition, the NLLA strongly encourages the public to submit your views through the provincial government’s online survey, or in writing using the library system review – public consultation  online response form. Submissions will be accepted until November 4, 2016. Now is your chance to tell the province how much you value and use your public libraries! 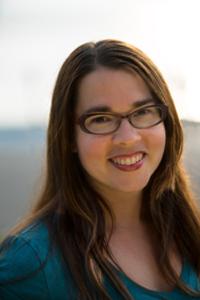 NLLA President, Krista Godfrey, spoke to CBC today about the provincial government’s announcement that it would be suspending the public library closures until a review can be done. Godfrey told CBC, “The best plan would have been to make an informed decision and have a transparent process, and obviously that’s not what happened to begin with, but better to realize that a mistake was made.”

“We’ve had a lot of feedback from communities, they’ve been very upset, kind of blindsided by this decision, so I think this will give them a chance to actually have their voice heard, which is excellent.” CBC reported that Godfrey said it’s vital now to ensure the committee conducting the review looks at individual libraries to make informed decisions if they move ahead with closing any of the locations.

“Libraries are great equalizers, they are part of people’s lives from birth to death,” she said.

“One of the things I’m hoping will come out in this review is how underfunded this system is and will show that in order to provide the best system, we need to address the chronic underfunding that has happened.”

Great news today as the government announced that they will be suspending the library closures. According to the announcement, “an external assessment that contemplates the full impact a library has on its community” and a steering committee will be formed to lead this review. We’re pleased by this move towards an informed and transparent assessment of the library system and look forward to positive outcomes.

Canada’s Book and Periodical Council (BPC) has issued a statement urging the Government of Newfoundland and Labrador to abolish the new 10% sales tax on books and find ways to keep all of the province’s public libraries open. In a letter to Premier Ball, BPC says they believe that the combination of these two actions will hurt more than help people in the province.

“Our members expect the following effects:

The Book and Periodical Council is the umbrella organization for Canadian associations that are or whose members are primarily involved with the writing, editing, translating, publishing, producing, distributing, lending, marketing, reading and selling of written words. Their members represent approximately 6,000 individuals and 5,500 firms and institutions. 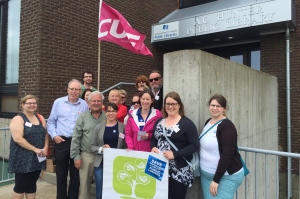 Many library users stopped to show their support for libraries and to take buttons, including NDP leader Earle McCurdy. 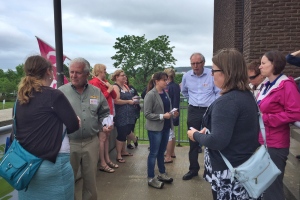 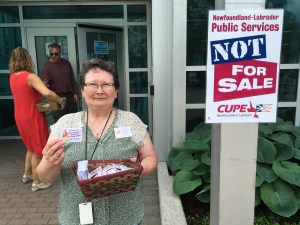 Some of the facts being distributed by CUPE included:

CUPE and NLLA encourage library supporters in this province to contact Education Minister Dale Kirby and let your voice be heard: